I Ride: 2009 ZX6R
Garage
Quote:
Originally Posted by Duc995 View Post
Good job! When I did mine I used Q-tips to thoroughly clean the the grooves that the seals reside in; I found the grooves to contain a lot of crud and it took some real effort to get them spotless.
Thanks man, yeah there was definitely a lot of gunk behind the seals! I made sure to take some time to clean it all out for the new seals to seat as best they can.
Now it was time for the lines. I can't say enough about Core Moto, the owner and President Luke got back to me asap and did everything he could to make things right. They have been testing a new coating for the banjo fittings with some of their riders such as Josh Hayes and Richie Escalante, as well as Josh Herrin's street bike. They are going to phase it into production soon, and since they were out of the traditional black fittings he offered the new black coating to me! It's pretty slick and kinda cool that I'm one of the first to have this setup.
I had been using aftermarket titanium banjo bolts for the M/C's and calipers, but decided to use the Brembo supplied banjo, as well as the Core Moto supplied banjo bolts. I figured they put more R & D into their bolts than someone just machining generic titanium banjo bolts. It took more time than I thought to get the lines and banjos to line up and mount correctly, but did my best to make sure they were routed well and not under stress. All I know is I was filling and bleeding the front brake system in the garage until about 10:30pm that Thursday night before my round! It was a long day, but was feeling pretty good about the front. Still had the rear system to attend to on Friday morning, and get some testing done in the limited space I have on my street. 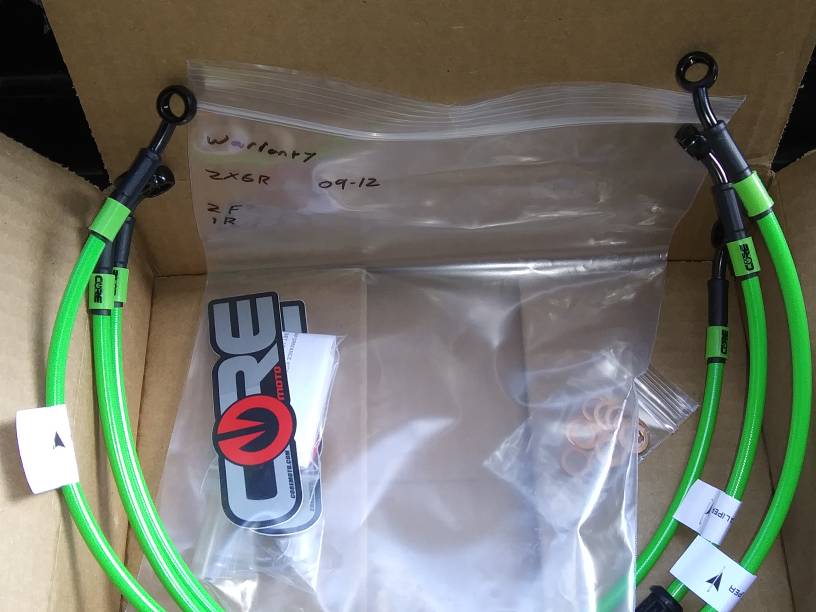 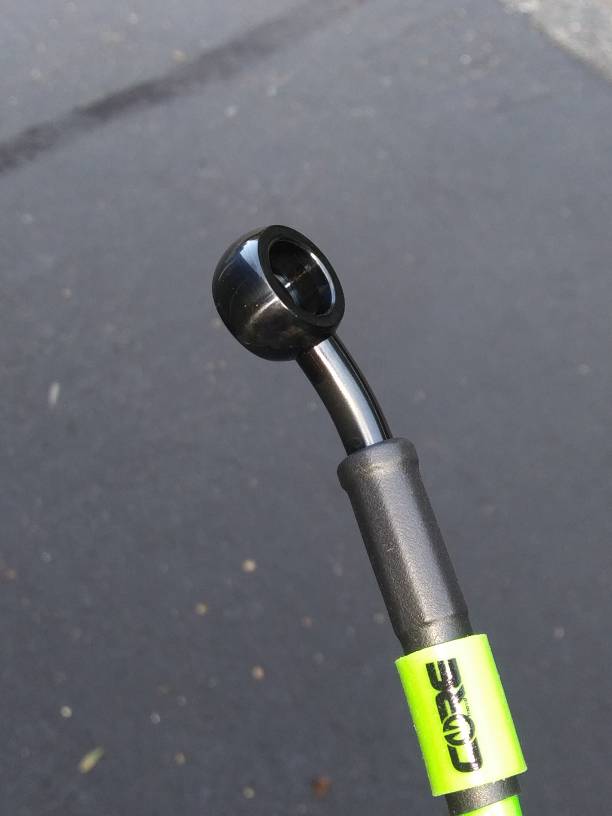 I Ride: 2015 30th Anniversary ZX-6R S.E.
Quote:
Originally Posted by MotoCT View Post
I do, with a toothbrush and soapy water. I haven't taken it the step further and secured a nut and bolt through them to move them around however. I bought them brand new before the 2017 season.
To rule out the rotors I am gonna run a set of oem that I picked up that are much straighter and just as thick. I am also going back to the Vesrah RJL's.
RJ, have you rebuilt your calipers within your 60k miles? I didn't know if I should get in there since I have them removed at the moment. I figured I'd just remove the pads, and try to squeeze the pistons out a bit to clean them even better. I'm having trouble getting them all to pop out as much as I'd like though.

Sent from my LM-X410.FGN using Tapatalk


Don't use a bolt to turn the buttons, use a wooden dowel instead.

Also, remove the calipers & rotors; place rotors on a smooth surface - like a glass table top or counter top. Check them to see if they are true or have become warped. If they seemed to be true address them using a hand drill & brake hone on both the inside and outside of the rotors. Recheck. If rotors are warped don't reinstall! Take them to a brake/machine shop & have them turned (if within specs). If not able to turn, discard & replace rotors.

Remember to use brake fluid to clean the pistons - if you've cooked fluid onto the walls of the pistons/caliper you might need to touch up with steel wool or ultra fine wet/dry sand paper, clean using only isopropyl alcohol or disc brake fluid - Do Not get aggressive with abrasive products, be patient when removing coked brake fluid. And remember to lube the fluid & dust seals with Si grease. Obviously wear latex/silicone gloves when using brake fluid.
C8H10N4O2


Join Date: Jul 2013
Location: USA
Posts: 1,094
Quote:
Originally Posted by ZedExMuse View Post
...And remember to lube the fluid & dust seals with Si grease.
Thats interesting in that the OEM manual says nothing about using grease. I searched high and low for support to the argument to use an assembly grease, and the cons seemed to outweigh the pros. The against issues were the grease attracting and retaining dirt, and the concern of the grease contaminating the brake fluid. I ended up following the manual and just using brake fluid as assembly lubricant. Still dont know what is the correct technique.

I Ride: 2009 ZX6R
Garage
The rear caliper was easier to rebuild than the front. I got some new pads from Renthal (RC-1) earlier in the season and threw those in as well. I also cleaned and took some scotch brite to all off the brake pad pins to ensure the pads can move freely back and forth. Again it took some maneuvering to get the lines and banjos to line up well enough so that I wasn't stressing the line. If it wasn't in such a time crunch it may have seemed easier haha.
Another thing I did on both front and rear systems was to use the banjo bolts supplied by Core Moto, and the Brembo double banjo bolt that came with the M/C. I had been using aftermarket Titanium banjos all around, but like I mentioned earlier the orifices were significantly different sizes compared to the bolts that were made for the lines and MC. It may not be a big deal but I was trying to rule out any possible weak points. Obviously I used brand new crush washers, and took the time to measure the spacing of the orifice on the bolts, and use the correct thickness of crush washer to have the lines perfectly centered for ideal fluid travel. Again maybe a bit of overkill, but I don't plan on doing this again for awhile. 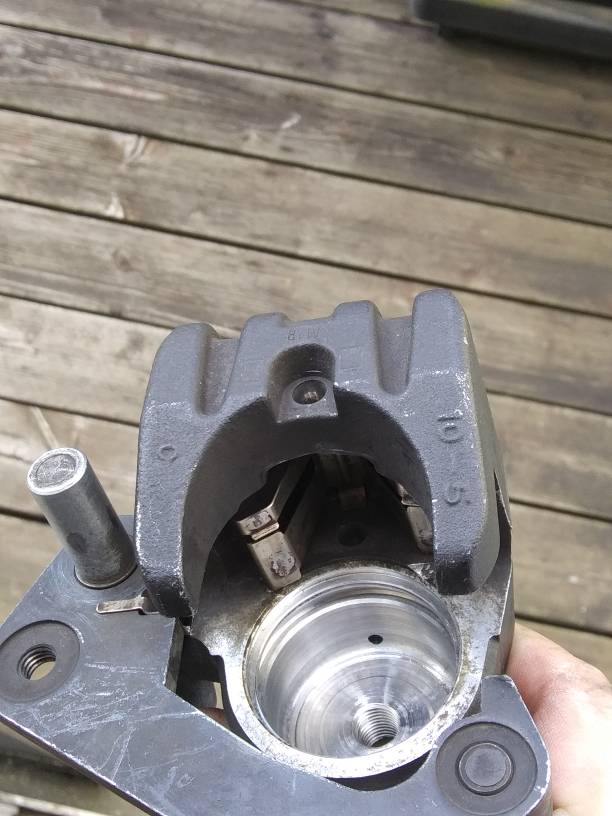 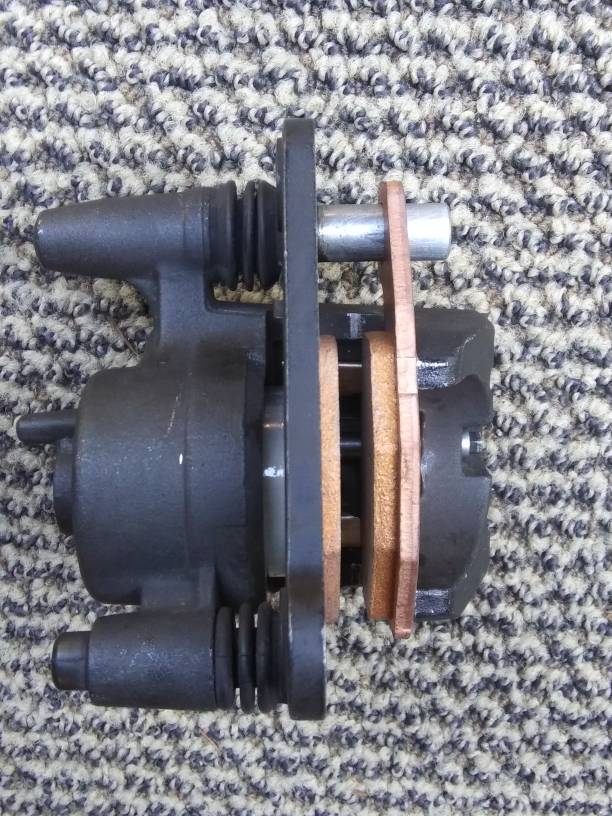 Join Date: Jan 2017
Posts: 56
Quote:
Originally Posted by RJ2112 View Post
I'm sure at this point Rivers thinks I'm an idiot, LOL. No, I haven't rebuilt my calipers. It's obviously a good idea; it hasn't bit me in the arse yet and I don't place all that serious a demand on my brakes just riding on the street.

A track bike which sees multiple heavy heat cycles each time it's used, and then sits for a week or two before getting ridden just as hard I would probably pay considerably more attention -- especially if I am getting indications of something amiss.

The extra time doing preventative maintenance is far better than having to mend your body, and then do it anyway.

v/r,
Good call on possibly warped rotor. The Kawasaki manual says to rebuild the brake pistons & seals every 2nd brake pad change, and it doesn't seem too hard just involved to pump the piston out, clean it, change the seals, and bleed the brakes.
AlexFromCali is offline
Quote
post #36 of 36 Old 08-02-2019, 04:08 PM
AlexFromCali
Squid

Join Date: Jan 2017
Posts: 56
Quote:
Originally Posted by Duc995 View Post
Thats interesting in that the OEM manual says nothing about using grease. I searched high and low for support to the argument to use an assembly grease, and the cons seemed to outweigh the pros. The against issues were the grease attracting and retaining dirt, and the concern of the grease contaminating the brake fluid. I ended up following the manual and just using brake fluid as assembly lubricant. Still dont know what is the correct technique.

What brand of Si grease is sold for that use? I have heard that Brembo makes something like that.
Manual does say to just coat it in brake fluid. For the actual piston to the brake contact I just use a silicone caliper pin grease on the piston lip, and the rear plated side of the brake so the piston doesn't stick to the brake pad. It's good practice.
AlexFromCali is offline
Quote